What is the maximum death rate I should allow?

With 44000 people on a generation ship for genetic diversity reasons, it is inevitable that some will be ill.

However, if I were to go through a list of every infectious illness and decide whether or not it is allowed, should I have a death rate limit? Is there a point at which pregnancy rate and more importantly birth rate, can't overcome the death rate from infection assuming an average death rate of 8 per 1000 per year from other causes?

So is there a point at which death rate from infection would cause something like this to happen to the population: 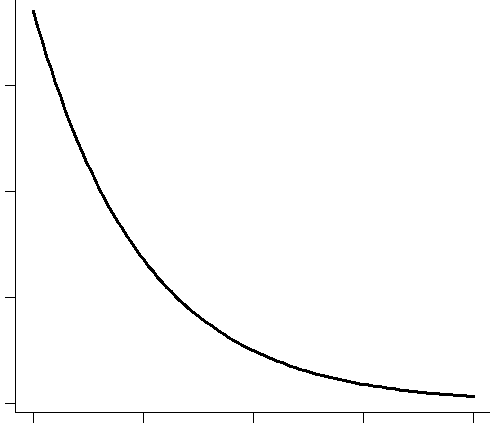 In other words exponential decay once the birth rate lowers to below the death rate?

Assuming about a fourth of the women are in the fertile window per week and a sex ratio of 1:1, this means with every pairing, there is at most a 25% pregnancy rate per week in the population. But of course, those that didn't get pregnant before would try again and so it would increase to be more than 50% of the women within a month that get pregnant, say something like 80%. Of those that get pregnant say 20% miscarry and 1% end up with a stillbirth. This would mean a 79% birth rate in pregnant women which would mean a 31.6% birth rate in the population overall. And this 31.6% would be every 2 years because these women breastfeed for 2 years.

You are missing at least three things:

1) Fecundity (willingness + ability) is more pertinent than fertility (just ability). These things are not stable over time.

2) If you're not thinking about "Replacement Rate", you'll have a problem. However you create fertility, you'll have to do it enough to replace ALL deaths.

3) Not every method of fertility is 100% effective - either in creating offspring or preventing offspring. Your schedules are too rigid.
C

But fecundity I assume to be high because if it isn't high for a given couple, they are still forced to have sex for the purpose of pregnancy so fecundity doesn't even need to be accounted for. As for replacement rate, that is just birth rate - death rate and a slow growth = a low but positive replacement rate. That is exactly why I am asking about the upper limit on death rate and why I put the average death rate without illness as 8 in 1000 per year in my original post


I find, is not all that accurate, especially with a population in the thousands because plenty of women go through menopause late and plenty go through menopause early and this graph assumes all women are at 45-49 when they go through menopause. Plus there is the possibility of postmenopausal pregnancy with assisted reproductive techniques such as IVF. But I am assuming all natural conception and infertile couples making a slim minority.

That is just for female fertility.

And as for male fertility, I always thought it was constant without any medical problems because spermatogenesis is a constant process. No matter if a man is an adolescent or is 100+ years, he will produce sperm as long as no medical problem or Y linked disease causes him to not produce any sperm.

And the rigidness is for a reason, so that pregnancy can be guaranteed in at least 80% of the women after a month. Also, on a generation ship, I don't think you would want teens recklessly having sex and all the female teens becoming pregnant because teen pregnancy is risky.

And another thing I am assuming here is vaginal birth if possible(so if the baby is breech, the mom would change to the all fours position to allow for easier vaginal birth). Transverse is the only position that would absolutely require either an internal or external cephalic version(I think the internal one is done once the water has broken and the external one is done before that) or a C section if the baby can't be turned to head-first or breech.
Last edited: Apr 12, 2018

Suppose we accept your live birth rate of 31.6% per 2 year per woman.

Now we need to know when women start getting pregnant, and when they stop.
Let's assume they start at age 18 (no teenage pregnancies) and stop at age 42 (before the meno pause).
That means that a generation is 30 years on average, and women become pregnant during 24 years.
In turn that means that a woman gets 24 x 31.6% / 2 = 4 kids during her life time.
And on average 2 of those kids will be female.

To be honest, the men are pretty irrelevant.
It's the women that are the bottleneck due to the long period before they become pregnant again.
So let's only look at the women.

Suppose we start with 100 women that haven't been pregnant yet.
And suppose there is no illness other than dying at an age of about 90.
Then 1 generation (30 years) later we have 200 female kids and those same 100 mid-aged women that won't get pregnant any more.
At 2 generations (60 years) we have 400 female kids, 200 females at mid-age, and 100 elderly women.
At 3 generations (90 years) we have 800-400-200, and we assume that those 100 elderly ladies have peacefully passed away.
This is now our population pyramid. We have 4:2:1 female kids:mid-age:elderly. And the numbers double in every generation.

It means that in 1 generation (30 years) the female population grows by a factor of 2.
The total population, including males, is simply double in all respects. It means that the total growth factor is exactly the same.
Consequently the growth rate on a yearly basis is:
$$\text{Growth rate by birth} = 2^{1/30}-1 = 1.023-1=2.3\%$$

caters said:
And the rigidness is for a reason, so that pregnancy can be guaranteed in at least 80% of the women after a month.
Click to expand...

Well, if you're going to insist on this, you'll have to include the Mutiny Risk or it will be inappropriate to assume a Human population - or any other sapient species - even on a Generational Ship where there may have been agreement up front. Future generations will not have made the same binding commitment. This all sounds like yet another really terrible post-apocalyptic, controlled-society, teenagers-take-over-the-establishment movie. There are already enough of those.